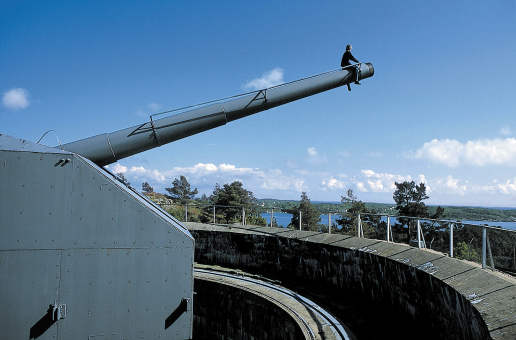 A historical defence museum that features a heavy German coastal defence battery from 1940-45, with the world’s second largest land-based cannon (337 tonnes). Plenty of other material from WWII.

Møvik Fortress outside Kristiansand was built by the Germans during World War II. The museum houses the only remaining 380mm Krupp gun in the world.

Bunker 55 is one of the two original German ammunitions stores for 38 mm grenades and ignition charges. This is a very special bunker, and well worth a visit.

History:
Møvik Fort was erected between 1941 and 1944 by the German Navy as one of the four coastal defence batteries that made up the Kristiansand artillery group. In the autumn of 1941, 744 Norwegians worked at the installations, as well as 231 Danes, 31 Germans and 356 men from the fortress pioneers. Prisoners of war from a prison camp on the field to the east of the fort were also used as labour. German experts were brought in to assemble the guns.

The battery was originally called the Kroodden Battery, but was renamed Batterie Vara to commemorate a German general who was killed during construction of fortifications on the occupied islands in the English Channel.

Møvik Fort on the Norwegian coast had a sister battery in Hanstholm in Denmark. They were built to block off the Skagerrak strait and the sea route to eastern Norway, Kattegat and the Baltic for the allied naval forces. This construction of heavy artillery was initiated on Hitler’s direct orders.

The cannon is one of the largest in the world, with a 380 mm calibre. The gun barrel alone weighs 110 tonnes, and is almost 20 metres long. It has a reach of 55 kilometres.

Today, Møvik Fort is a peaceful spot on the hills near Vestergabet to the south of Kristiansand.

In the vicinity of hiking areas and bathing places.

See the pictures from the museum down here.