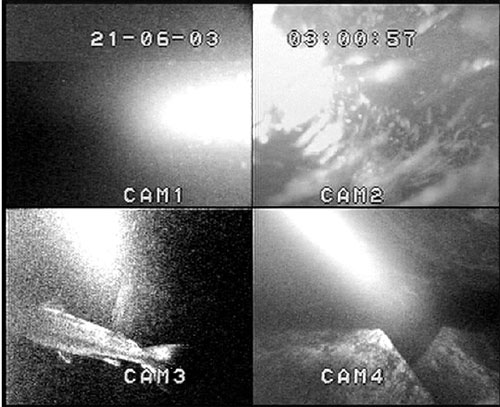 First of all will I say, that this article is translated in Google. So if there are some grammatical errors, I apologize to this, because we have no money to hire a professional.

In 2003, there is a mapping of how the salmon migrated across haugefossen. It was conducted via video surveillance from June to October.

Several studies were carried out so far had shown that the salmon were delayed or prevented from opvandre Laudal to Mannflåvann. Video Studies in 2002 by water rings behavior of salmon and sea trout at Laudal (Lamberg 2003), showed that it was an assumption that conditions further down the river led to uneven ascent of salmon in the river.

They had a hypothesis that two particular gushing which was potentially obstacle to salmon in the river further below Øyslebø. These were Haugefossen and Nødingfossen. Based on this, the 8th May 2003 decided to start video surveillance at their optimum location which was Haugefossen.

The study showed that salmon and sea trout migrate in the bright part of the day and that fish migration stops during high water flow in Haugefossen.

What method did you then to map this investigation are to be reached well equipment that could withstand the conditions that are in Haugefossen. A Watec 902 H camera with wide-angle lens at 3.8 mm, which covers a visual angle under water at approximately 70 degrees horizontally was set up four places. By means of the diodes with three white LEDs, which have a beam angle of about 30 degrees horizontally, meaning that the camera image was not completely lit at night, but the fish which swam through the light cone yet registered. Recording speed was 120 hours on a 3 hour s-vhs cassette which represents approximately 1.2 images per second. 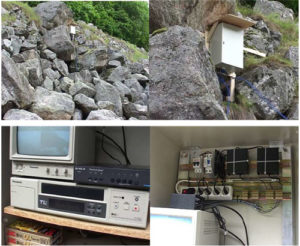 Water flow data for the survey used to measure the station at about Kjølmo 2 km below Haugefossen where water flow is logged every hour. Fished behavior influenced a lot of changes in water flow, therefore it is an important tool for salmon fishermen at the river. Water flow at kjølmo is delayed between 1.5 to 2 hours compared to Haugefossen. This may of course recognize in the study, in order to get the most accurate knowledge about the salmon’s behavior at the waterfall.

Images were examined continuously for the period from 19.6 to 30.6. It turned out that the salmon that passed Camera 3, often stood in the picture or walked back and forth. This meant that it was very labor-intensive, to separate the individuals who walked, and at which time. Therefore, changes in one assay method for counting fish in the image of one minute in every ten minutes periods. In the camera 1 and 2 was made count of all fish in the image in a minute periods every full clock hour during the entire period from d.19.6 to 4.8.

The water temperature reached the measurement was performed by Bjelland every hour, as this was the same at both locations.

It unfortunately had some problems with the cameras relative to water flow, because when Haugefossen went below 29 m3 / s was 1.2 camera, 3and 4 are not under water, it happened fortunately only between 1-5 hours in July. Camera 1 was destroyed d.25.7 kl.16 the water flow of about 100 m3 / s and was not restored. Camera 2 stopped working with low water flow in the period from 17.8 to 7.9, and was then not put into operation again. Camera 3 and 4 works throughout the period. 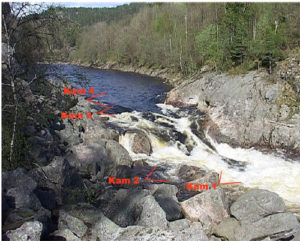 Medium water flow during the investigation period of 51.2 m3 / s and the water temperature varying from 9.5 to 23.8 degrees.

There were recorded the most fish in camera 2 and 3 in the period from 19.6 to 4.8. By Camera 3 and 4 stopped the fish are not up to the camera 1 and 2, but passed through the image. Especially camera 4 residence time was only 1-3 seconds. In Camera 3 fish were standing longer than the camera 4, but rarely longer than 10 minutes. They made observations of individual fish that had characteristics that were first seen in the camera 3, for then and be seen in the camera 4th

As I said, there were maximum activity in the sound hours of the day in all 4 cameras.

As with the cameras relative to water flow, because when Haugefossen went below 29 m3 / s was 1.2 camera, 3and 4 are not under water, it happened fortunately only between 1-5 hours in July. Camera 1 was destroyed d.25.7 kl.16 the water flow of about 100 m3 / s and was not restored. Camera 2 stopped working with low water flow in the period from 17.8 to 7.9, and was then not put into operation again. Camera 3 and 4 works throughout the period. 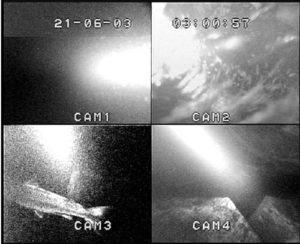 After d.7.9 fall migrated this year significantly compared to June and July, and one registered between 1-8 fish per day.

When the flow was high, the number of fish naturally by camera 2, and therefore it was neither the big surprise that by means of flow at Camera 3 saw the greatest activity compared to when there was high water flow. When the flow was over 50m3 / s, the number of fish by camera 2, and that is that as was the fish and waited for the water flow should fall, it has therefore always wondered that permit fishing just below the waterfall, it should be clearly, in my view stop, when you have other places by the river, which may not be fished.

Similarly stopped migratory significantly using a water flow of 55 m3 / s, while that one could see that already downward drop in water flow, began the fish by water flow of 80 m3 / s to touch on it, and similarly came activity then by camera 3rd

But when you compare the total catch in 2003, the estimate was roughly calculated migratory totaling 5250 paragraph gave this a capture efficiency of 35%. Let us be dwelling on this fact, then it surely very well that if you think it is easy to catch a salmon by mandalselva, then you have to think again. It requires skill and a great deal of luck too.

Camera 3 was placed in the middle of the main migration route for salmon and sea trout after they had passed the difficult part of the waterfall. An estimate of the catch efficiency of mandalselva above Haugefossen by the total number migratory  fish through camera 3, and catch records Mandal River above Haugefossen suggests that most part of the fish horizontally up in 2003, passed Camera 3rd

The study showed that the salmon migrated when it is light, and rarely resided for more than 10 minutes at camera 3. When it was dark stopped the fish up and first started to walk when it was light the next day. Walking pattern of Haugefossen in 2003, very similar to the observations we have made in many other of Norway’s salmon rivers. Therefore, it is shown that the salmon and sea trout is extremely dependent on the light that can climb migration barriers.

The largest number of water rings fish occurred in June and July, for in August of trains number of opvandrende fish, but you also have to remember in this context that when fish become sexually mature they also start to wander.

The salmon migrate not Haugefossen when water flow is above approximately 50 m3 / s, and the survey also gave the answer to that is no longer down the river there were obstacles when the river went between 20-120m3 / s. So one might conclude that Haugefossen is a major obstacle to salmon and sea trout when it goes over medium flow.

Why then bring and write a report released in 2003, when we write 2016. The first of the report provides some information you can use for its fishing, and knowledge you might not showed reached on some salmon fisherman who has started fishing by the river in recent times.

It has been confirmed to me that this information to obtain out also as the picture looks today 13 years later. Therefore, it is extremely exciting to dive in and retrieve the information forward so you are aware of these conditions.