If you have been fishing since the age of 6 years then you must be called a true angler. It is exactly at that age our second fisherman in the portrait series “Mandal River Heroes” started. His name is Ryan Marchese and is today a guide on the Mandal River with his own company AnglerPilot.

It all began on the banks of the River Thames in London with his Grandfather and Stepfather. Though it wasn’t until he moved from London to the country and got his first real fishing set at the age of 10, that fishing became both a passion and an obsession. Then at the age of 12 his fly fishing and fly-tying journey started.

Ryan moved to Norway in 2003 and lived in Mandal for 7 years. In 2010 together with his Norwegian wife, they bought a house in Holum, just a stone’s throw from the river. To have a house and family by the river bank, a dream for many of us who every year fish by the Mandal River.

His first ever experience with the river was during his first time in Norway in 2001 when his brother-in-law and former Mandal River Forman Odd Møll took him fishing and there started his love for the river. The nature, the great fishing and the atmosphere along the river just some of the reasons for this love.

When he was asked the question what part of Zone 2 in the river was his favorite spot as he fishes most of the time in Zone 2, he told me this. “There’s many great parts of the river in Zone 2, so it’s difficult to choose just one, but amongst them Fossefjellene and a private section of Øvre Møll.”

When asked about Zone 3 his answer was the Øyslebø waterfalls. “Although the fishing is not necessarily the best, the waterfalls and pools there after because it’s just beautiful. For really good fishing though, it has to be from Timberåsen and down past the railway bridge, then 100m past the first deep pool.”

Zone 4 means a lot to Ryan. When asked about place in Zone 4 he told us this. “I just love the whole of Zone 4 for it’s untouched natural beauty, great places for fishing and lesser number of fishers. But if I had to choose a specific place then it would be at the very top of the Bjelland waterfall. But there are some awesome places which are only accessible by raft between downstream of Bjelland church to Trygsland.”

As guide by the Mandal River he has far less time for his own fishing but gets far more joy being able to help others catch their dream salmon. “Being able to give someone a new skill, a new experience or their dream is a real honour.”

The salmon he remembers the best was the first large salmon he ever caught. “It was the first time I had ever fished the Mandal River and my brother-in-law took me out onto the river at Øvre Møll. A few hours had passed and we had caught just a few smaller sea trout. They fished in a small bay upstream of a well now salmon holding pool and the rod buckled round aggressively. After about 10 minutes, the fish was finally in the net and that fresh run grilse laid there, my prize. It was quickly dispatched and my mother-in-law made a wonderful salmon dinner that evening with the fish. Such great memories.”

Ryan has in no time achieved great success with AnglerPilot, and had been on one of the big TV channels in Germany with his guiding. Here is how he had experienced it, “It sounds maybe quite like a cliché, but I do feel really honoured to have experienced so much success, so quickly. I have worked hard, and nothing has come free but at the same time I feel very lucky. I am really thankful that I have been received so positively and hope that my efforts have a positive effect for the future.”

He also explained “Another good thing about the guiding is the variety of customers that come to the Mandal river and their wishes that are very varied. The motivation is 100% salmon but at the same time the beauty and nature along the river. Generally families like to experience other things than fishing, but for the vast majority of guys, it’s all about the salmon. If they ask or I see they’re motivated for other activities, I’m more than happy to recommend one of the many other things to do here in the area.” So Ryan is also a good ambassador for Southern Norway. 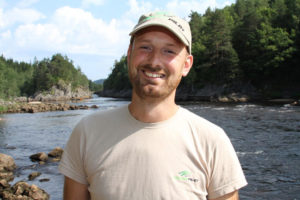 When it comes to the positive that has happened in the Mandal river, Ryan has this opinions “It’s great to see the return of the salmon, the land owners increased efforts to make the river better for fishermen and the river becoming more accessible for the general public.”

What hopes has this great guy for the future of the Mandal River? “I’d like to see increased focus on sustainability of the salmon. Looking outside of Norway’s borders towards the success stories of the UK, Canada and USA. Less or no netting of wild salmon both at sea and in the river, and more catch and release of female salmon.”

A great thanks to Ryan for letting me make this portrait of him, and good luck by the riverbank!

Michael Aagaard Olsen - 1. december 2022
THE ORANGE MANDAL This fly is a allround pattern, and in largest size spring and autumn size 4-8 and small in the summer size 10-14 Orange...