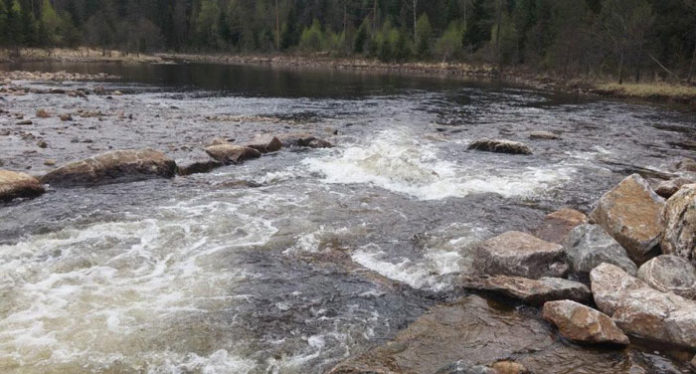 The zone “Strethylene” extends from the pool at the “Laksehylen” and southwards on the west side of “Storøy” and down to the border with the Lille Strait and the “Nodehylen” zone. The zone includes fishing in the lower parts of the Laksehylen pool. In the western elven race there is a roaring narrow river stretch where there are laid out “resting stones” where the salmon can rest between each step up the roaring iron. Below is a quiet pool where it is deep in place where the salmon can stand when the heat of the upper water layer becomes too hot. Furthermore, eleven in a new little strike goes down to a new hollow we have called “Strethylene”. Here are also some big stones where the salmon can find shelter behind and here are deep parties that give shade and cooling of the water temperature in late afternoons.

The zone consists of approximately 1000 beach meters. It can be fished both from the western part of Storøy and from western river banks. From the northern part of Storøy you also get parts of the eastern river rivers that shower down towards Nodehylen. From the river and down the west side there is no “counter fishing”. With small / moderate water flow it can be wowed over to Storøy.

There is bar limitation on only 2 rods.

Parking space is designated along Rv 455 at the exit to old farmhouse. There is no toilet in the area but only about 5 min by car to Lax Center. It is the sign at both ends of the zones visible from the shore.

:EN-US;mso-fareast-language: EN-US;mso-bidi-language:AR-SA’>Please note that fishing is prohibited from the border Sone Bjåhylen south and past the settlement. It is also not permitted to travel on the eastern river bank in the upper part of this zone due to beasts and buildings. However, there is the possibility of swimming and fishing in part of the area. Follow signage.